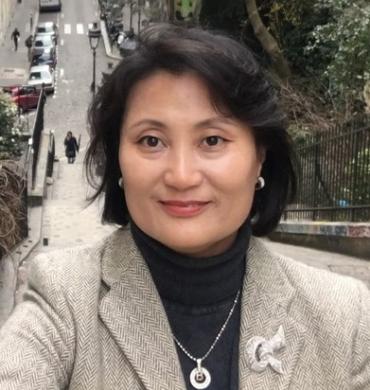 Dr. Lee (Ph.D., CFS, & Assoc. Prof.) is a Department Chair of Food and Nutrition and Graduate Program Director of M.S. Food and Nutritional Sciences program. She received her Ph.D. degree from Korea University (Seoul, Korea) in 2001 and worked at Iowa State University (Ames, IA) long time as a research scientist. She joined the UW-Stout in 2011 as an Assistant Professor and then early promoted to Associate Professor in 2015. Dr. Lee served as Evelyn Van Donk Steenbock Endowed Chair (2015-2017) and received the tenure in 2017. She has been working as a Graduate Program Director since January 2016 and Department Chair since May 2018.

Teaching Interests: Since 2011 when Dr. Lee joined the Stout, she has developed four new courses (FN123-Science of Food (GE), FN425/625-Food Chemistry, FN435/635-Food Analysis, and FN725-Flavor Chemistry) related to Food Chemistry followed by IFT guideline and has been teaching them so far.

Research Interests: Focused on the food chemistry area, especially “bioactive peptides produced from the egg protein (phosvitin)” and “mechanisms and prevention studies of quality changes of irradiated meats”. She has published more than 60 papers in peer-reviewed journals and 12 book chapters and received total $ 0.6 M research grants since 2002.

Professional Interests:  She has been actively working in the IFT leadership team since 2013. She was elected the Chair Designate of IFT Food Chemistry Division in 2016 and then served as the Division Chair (2017-2018) for 1,400 division members. Institute of Food Technologists (IFT) is the largest international food science association with 17,000 members and evaluates the accreditation of food science program, which UW-Stout Food Science program received in 2014.